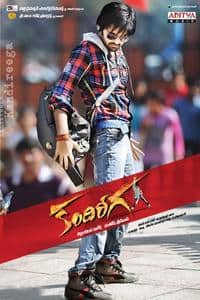 Kandireega (english translation : wasp) is a telugu romantic comedy film directed by santosh srinivas and produced by bellamkonda suresh under sri sai ganesh productions and released on 12 august 2011. the film features ram and hansika motwani in the lead roles. the film's music was scored by s. thaman. it was declared a super hit at the box office.