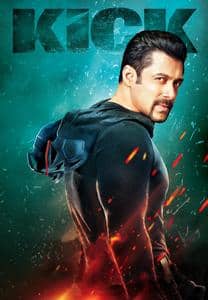 Kick is a bollywood action thriller film starring salman khan and jacqueline fernandez in lead roles. the film also features nawazuddin siddiqui in a villainous role along with randeep hooda who plays a cop. the film is a remake of a telugu film of the same name. the film is directed by sajid nadiadwala and was declared as a blockbuster, being the second highest grossing bollywood film of all time in india.