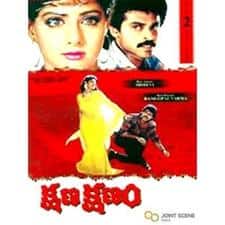 Kshana kshanam is a 1991 telugu, road movie, directed by ram gopal varma. the film was subsequently dubbed into hindi as hairaan. the path breaking film received critical acclaim and has garnered the state nandi award for best direction. the film became a blockbuster at its second run, and remained a cult classic. varma later directed and produced road movies like daud, anaganaga oka roju and road on the lines of kshana kshanam.