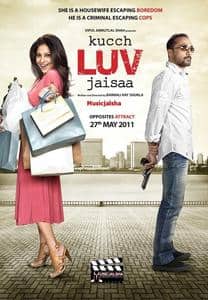 Kucch luv jaisaa (hindi: ??? ?? ???) is a 2011 indian film. written and directed by barnali shukla, the film stars shefali shah and rahul bose. kucch luv jaisaa marks the second film that bose and shah have acted in together; they also played a married couple in aparna sen's 15 park avenue (2005). model neetu chandra and television actor sumeet raghavan are also in the film. the music is by pritam.