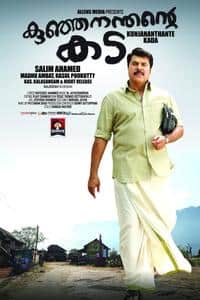 Kunjananthante kada is a 2013 malayalam drama film written and directed by salim ahamed. the film stars mammootty in the titular role, as a shopkeeper, alongside debutante actress nyla usha while salim kumar and balachandra menon play other pivotal roles. the story is about a small-time shopkeeper in kannur and his attempt to find his own place in a rapidly changing world.the film features original background score composed by issaq thomas kottukapally.