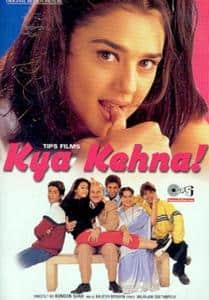 Kya kehna (hindi: क्या कहना; english: what to say) is 2000 bollywood film starring saif ali khan, preity zinta, chandrachur singh, anupam kher and farida jalal. it was directed by kundan shah and premiered on 19 may 2000.the film was a hit and established zinta's career as an actress. the film dealt with the taboo issue of pre-marital pregnancy and the views of society.