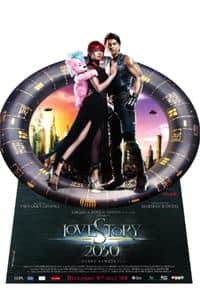 Love story 2050 is a 2008 bollywood science fiction film starring producer pammi baweja and director harry baweja's son harman baweja and priyanka chopra. some parts were filmed in adelaide, australia. initially the film was supposed to release on 21 december 2007 but got postponed to 4 july 2008 due to extensive post production work. the premiere was held on 2 july 2008 in london. the movie was released on 4 july 2008 to negative reviews and tanked at the box office.