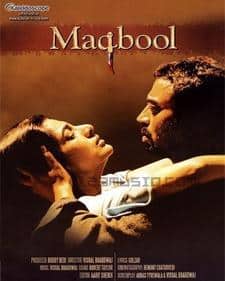 Maqbool (hindi: मक़बूल, urdu: مقبُول) is a 2003 indian crime drama film directed by vishal bhardwaj and starring pankaj kapoor, irfan khan, tabu and masumeh makhija in an adaptation of the play macbeth by shakespeare.the plot of the film is loosely based on that of macbeth with regard to events and characterisation. the film did not perform remarkably at the box office, but won director vishal bhardwaj international acclaim.