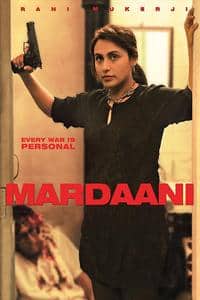 Mardaani (english: toughness) is a 2014 indian crime thriller film directed by pradeep sarkar and produced by aditya chopra. the film stars rani mukerji in the lead role, with jisshu sengupta and tahir raj bhasin appearing in supporting roles.the film tells the story of a female cop whose interest in the case of a kidnapped teenage girl leads her to uncover secrets of human trafficking by the indian mafia.