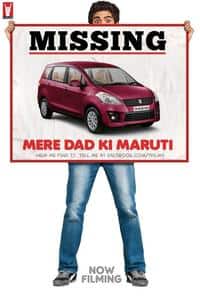 Mere dad ki maruti (english: my dad's maruti) is a 2013 bollywood comedy film directed by ashima chibber, featuring saqib saleem, ram kapoor and prabal panjabi in lead roles. the film takes its plot from the 2000 hollywood film dude, where's my car?. it also features newcomer rhea chakraborty in a pivotal role. it was well received by critics and audiences and did quite well at the box office.