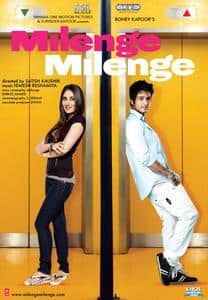 Milenge milenge (we will meet, we will meet) is a 2010 bollywood romantic drama film. largely based on the 2001 film serendipity, the movie is directed by satish kaushik and stars shahid kapoor and kareena kapoor in their fifth film together after imtiaz ali's jab we met (2007). other members from the cast include satish shah, aarti chhabria, and delnaaz paul.