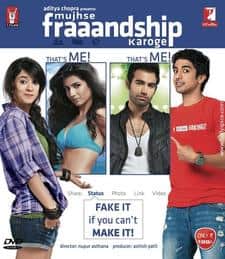 Mujhse fraaandship karoge is a 2011 bollywood romantic comedy film directed by nupur asthana, starring debutant actors in the lead role. the film is the second production of y-films, a subsidiary of yash raj films. it released on 14 october 2011. it also marked the debut of indian folk rocker raghu dixit in bollywood. the film is inspired by the popular social networking site facebook. it was declared as a hit at the indian box office