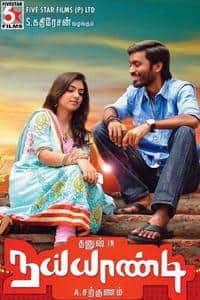 Naiyaandi (english:satire) is a 2013 indian tamil romantic comedy film written and directed by a. sarkunam. the film features dhanush and nazriya nazim in the lead roles. the plot focuses on a love story between a kuthu vilakku (lamp) shop owner and a bds student. it received 'u' certificate from central board of film certification and released on 11 october 2013.