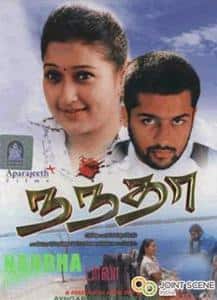 Nandha (tamil: நந்தா) is a 2001 indian tamil drama film written and directed by bala, starring suriya and laila in the leading roles, while rajkiran, saravanan and rajshree play other supporting roles. the film also marked the debut of comedian karunas, whilst its music was scored by yuvan shankar raja and cinematography handled by r. rathnavelu. the film released on 14 november 2001 and received critical acclaim & was a commercial success.