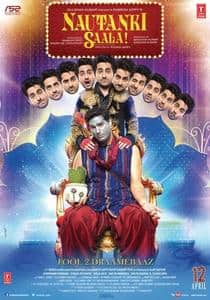 Nautanki saala! is an indian romantic, comedy film directed by rohan sippy, starring ayushmann khurrana and kunaal roy kapur along with pooja salvi, evelyn sharma and gaelyn mendonca. the story is based upon the 2003 french comedy film après vous.the film was produced by ramesh sippy, bhushan kumar, krishan kumar & roopa de choudhury under the banner of super cassettes industries ltd. in association with r.s. entertainment. the first look of nautanki saala! was released on october 2, 2012.