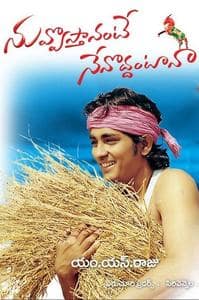 Nuvvostanante nenoddantana (english: if you said you wanted to come, will i say no?) is a 2005 telugu, romance film, starring sidharth and trisha krishnan. it marks the directorial debut of prabhu deva. film is on the same plot of 1989 maine pyar kiya .the soundtrack was composed by devi sri prasad. the film garnered eight filmfare awards south and has turned out to be a blockbuster. the film was remade in hindi as ramaiya vastavaiya which was released on 19 july 2013.