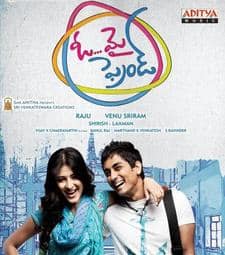 Oh my friend is a 2011 telugu-language musical film written and directed by debutant venu sriram starring siddharth, shruti haasan and hansika motwani. it was produced by dil raju and had music by rahul raj. the dubbed tamil version of the film was released on may 18, 2012, under the title sridhar, with sivakarthikeyan lending his voice to siddharth.