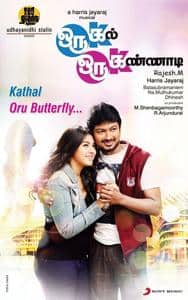 Oru kal oru kannadi (english: a stone, a mirror) is an indian tamil romantic comedy film written and directed by m. rajesh. it stars producer udhayanidhi stalin, in his acting debut, hansika motwani and santhanam, whilst featuring harris jayaraj's music and balasubramaniem's cinematography. the film was named after a song from the film siva manasula sakthi (2009). releasing on 13 april 2012, it opened to positive reviews and became a commercial success.