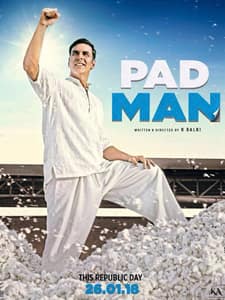 Padman featuring Akshay Kumar is set to release in 2018.Directed by R Balki, it is a comedy-drama and family entertainer.The star cast also includes Sonam Kapoor and Radhika Apte along with Akshay in the lead roles. Padman is based on the real-life incident of Arunachalam Muruganantham,the man whose initiative was to invent low-cost sanitary pad making machines in rural India helped not only his wife but other women in his village to lead a hygienic life. Amitabh Bachchan has a special appearance in the movie. Mr Bachchan had a successful venture with R Balki earlier (Paa).Padman is produced by Akshay's better half Twinkle Khanna.