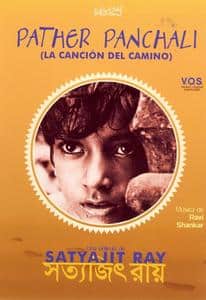 Pather panchali is a 1955 bengali drama film directed by satyajit ray and produced by the government of the indian state of west bengal. based on bibhutibhushan bandopadhyay's 1929 bengali novel of the same name, the film was the directorial debut of ray. the first film of the apu trilogy, it depicts the childhood of the protagonist apu in the countryside of bengal in the 1920s. though the film had a shoestring budget of rs.