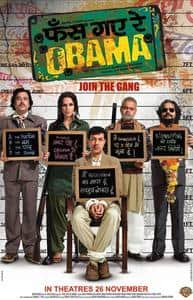 Phas gaye re obama (hindi: ??? ?? ?? ?????) is a 2010 bollywood satire film directed by subhash kapoor and starring rajat kapoor, neha dhupia, sanjay mishra, manu rishi and amole gupte in the lead roles. the music and the background score is composed by manish. j. tipu and lyrics are penned by shellee and gopal tiwari. the film was released on 3 december 2010. it was produced by revel films and distributed by warner bros pictures.