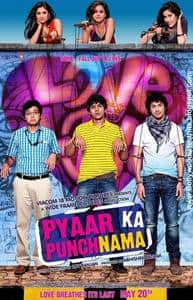 Pyaar ka punchnama is a 2011 hindi film starring kartik tiwari, rayo bakhirta and divyendu sharma. directed by luv ranjan, the film is the story of three bachelors who find girls whom they fall in love with and the twists and turns of the newly developing love stories. the movie was a surprise hit. according to box office india,pyaar ka punchnama gained immense popularity among the masses after a lot of word-of-mouth promotions and became an instant hit with the youth.