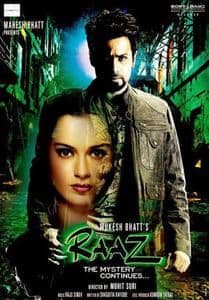 Raaz: the mystery continues, shortened as rtmc, (hindi: ????, translation: secret) is a 2009 bollywood supernatural horror film directed by mohit suri and starring emraan hashmi and kangna ranaut. the film is the second film in the raaz series, but story wise, it is not a direct sequel to the 2002 prequel raaz. the film deals with issues of the "evil within" the human psyche and how it manifests itself.