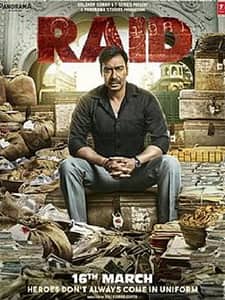 Raid is an upcoming Indian crime drama featuring Ajay Devgn, Ileana D'cruz, Saanand Verma and Saurabh Shukla. Written  by Ritesh Shah, the film revolves around  Amay Patnaik, a fearless Income Tax officer who carries out a non-stop raid at the mansion of Tauji, the most powerful man in Lucknow. The music album of the film consists of 4 songs and was released on 1 March 2018 by T-Series.