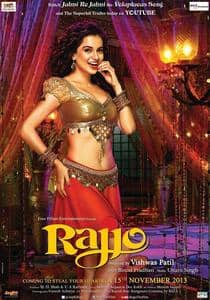 Rajjo is a 2013 indian romantic musical produced by four pillars entertainment and directed by sahitya akademi award winning writer vishwas patil. it stars kangana ranaut and newcomer paras arora in the lead roles and its supporting cast includes prakash raj, mahesh manjrekar and jaya prada. the film released in theatres on 15 november 2013. the film that earned 2 crores at the domestic box office bore a loss of 10 crores on the venture.