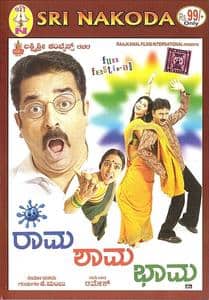 Rama shama bhama is a kannada film directed by ramesh arvind and produced by k manju. kamal haasan played a supporting character of the male protagonist while urvashi played the female lead. the film was released on 9 december 2005. a remake of the tamil film, sathi leelavathi the film went on to become a huge hit all over.