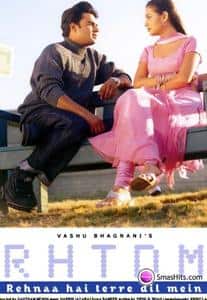 Rehnaa hai terre dil mein (english: i want to stay in your heart) is a 2001 indian film directed by gautham menon starring madhavan, diya mirza and saif ali khan in the lead roles. it was a remake of the popular tamil film minnale which also starred madhavan in the lead. the film was not successful during the time of its release, but over the years it has developed a cult following among indian youth. it is famous by its acronym rhtdm.