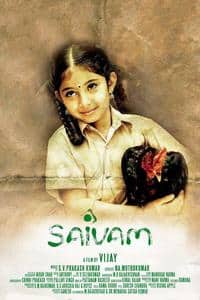 Saivam (english: vegetarian) is a tamil film written, directed and produced by a. l. vijay. the film features nassar in the lead role and child actress sara arjun plays another pivotal role, while the director's regular crew of cinematographer nirav shah and composer g. v. prakash kumar also worked on the project. the film was released on june 2014.