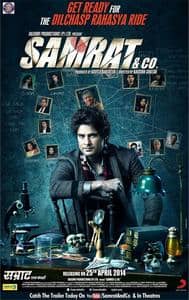 Samrat & co. is a 2014 hindi detective thriller film directed by kaushik ghatak and produced by kavita k. barjatya under the rajshri productions banner. it features rajeev khandelwal in the title role of samrat. the film was initially scheduled for release on may 1, 2014 release but was released ahead of schedule on apr 25, 2014.