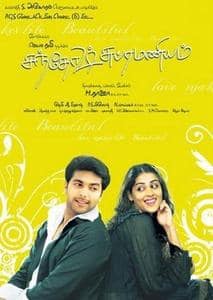 Santosh subramaniam is a 2008 tamil romantic comedy film which was directed and co-written by raja mohan while kalaprathi s. agoram produced the film. while jayam ravi and genelia d'souza played the lead roles, prakash raj and geetha, prominent actors from the south indian film industry, played the significant roles of one of the lead character's parents in the movie.