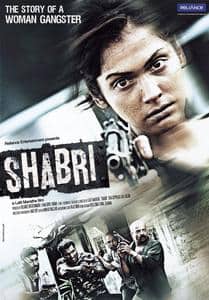 Shabri is 2011 hindi film directed by lalit marathe and produced by ram gopal varma. it is about a woman, played by ishaa koppikar, who becomes the first female crime lady in mumbai. the film was completed in 2005 and was showcased as the opening film at international rome film festival, and was also premièred at the new york asian film festival. the film was officially released worldwide on august 26, 2011.