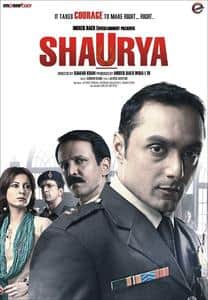 Shaurya (hindi: ?????;english: valor) is a 2008 bollywood film directed by samar khan, starring rahul bose, kay kay menon, javed jaffrey and minissha lamba. music in the film is by pop singer, adnan sami. indian actor shahrukh khan, is the narrator in this film.the film revolves around the court-martial of a muslim officer, javed khan, in the indian army, for shooting his commanding officer and is set against the backdrop of the kashmir conflict in northern india.