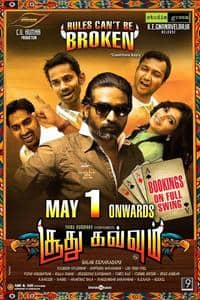 Soodhu kavvum (tamil: சூது கவ்வும், english: evil engulfs) is a 2013 tamil comedy film directed by nalan kumarasamy of naalaya iyakunar fame. the film's main concept is about how baloney has engulfed people's day-to-day life and modern society. it features vijay sethupathi and sanchita shetty in the lead roles. costume designer for sanchita shetty was bengaluru based designer reshma kunhi . the film was released on 1 may to universal acclaim from critics.