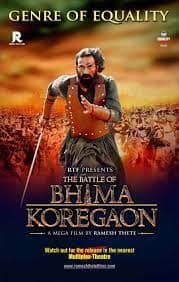 The Battle of Bhima Koregaon

The Battle of Bhima Koregaon is a Bollywood period war drama film starring Arjun Rampal as Sidhnak Mahar Inamdar, Digangana as Suryavanshi, Sunny Leoni as Kanta. The film is scheduled for release on 17 September 2021. Actor Arjun Rampal, who has made a strong place in Bollywood with modeling, is now focusing on playing strong roles. Last time Arjun played the powerful role of an army officer in JP Dutta's war drama film 'Paltan'. Now the news is coming that a film is going to be made on the famous battle of Bhima Koregaon recorded in history, in which Arjun will be in the role of a brave warrior of the Mahar community. This battle recorded in history took place on January 1, 1818, in which the Peshwa's army of 28 thousand was defeated by an army of 800 Maratha Dalits. It is being told that Ashu Trikha will direct this film.

The Battle of Bhima Koregaon Review