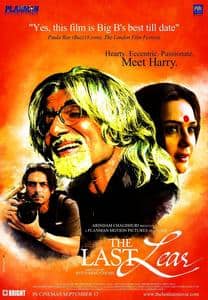 The last lear is an indian film, in the english language, directed by rituparno ghosh. the film won the national award of india for best feature film in english in 2007. the film stars amitabh bachchan, preity zinta, arjun rampal, divya dutta, shefali shah and jisshu sengupta. shefali shah won the 2007 best supporting actress national award for her role in the movie. it was produced by arindam chaudhuri of planman motion pictures.