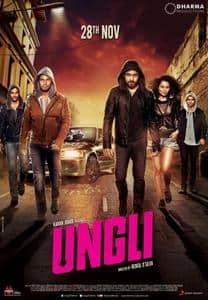 Ungli (english translation: finger) is an upcoming hindi language comedy-drama film written and directed by rensil d'silva and produced by karan johar and hiroo yash johar. the film features an ensemble cast including emraan hashmi, kangana ranaut, randeep hooda, neil bhoopalam, angad bedi and sanjay dutt. being delayed for over a year, the film is now expected to release on 28 november 2014.