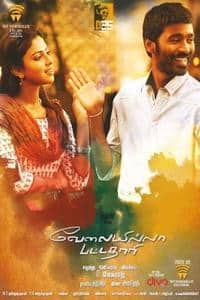 Velaiyilla pattadhari (english: unemployed graduate) is an upcoming indian tamil romance film written, directed and filmed by velraj, who makes his directorial debut. the film features dhanush, who is also the producer, in the lead role, along with amala paul, while samuthirakani and saranya ponvannan play supporting roles. dhanush's 25th film, it has music composed by anirudh ravichander.