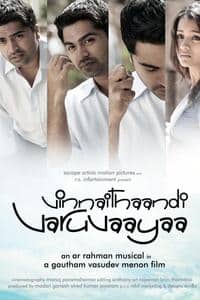 Vinnaithaandi varuvaayaa (english: will you cross the skies?) is a 2010 tamil romantic drama film directed and written by gautham vasudev menon, featuring silambarasan and trisha krishnan in the lead roles. the film, distributed by udhayanidhi stalin, features a successful soundtrack composed by a. r. rahman, cinematography by manoj paramahamsa and editing by anthony gonsalves.