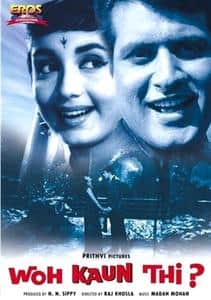 Woh kaun thi? (hindi: ?? ??? ??, who was she?) is a 1964 black-and-white psychological mystery film directed by raj khosla, starring sadhana, manoj kumar and prem chopra. though the screenplay was written by dhruva chatterjee, parts were later rewritten, wherein manoj kumar took an active role. music by madan mohan was the asset of this movie. all the songs were popular, picturised nicely but the expressionless face of manoj kumar was the weakest part of the movie.