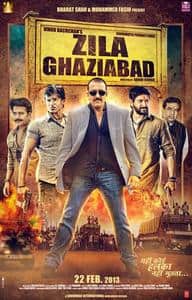 Zila ghaziabad is a 2013 bollywood political action thriller film directed by anand kumar. it is produced by vinod bachan, and presented by mohammed fasih & bharat shah. the film features arshad warsi, vivek oberoi, sanjay dutt, charmy kaur, ravi kishan, paresh rawal and sunil grover in lead roles amongst others. it was released on 22 february 2013. upon release, the film received mixed reviews, with a poor response at the box office.