Needless to say...there are lots of spoilers ahead!

The most awaited film of this month also turned out to be the ridiculed film of this month! Shahid Kapoor and Alia Bhatt's Shaandaar turned out be the second Bombay Velvet of the year (just like people say Anushka Sharma should stay away from all Virat Kohli matches, even Anurag Kashyap should stay away from Karan Johar!) Also Read - Alia Bhatt gives a flying kiss to the paparazzi; social media's hilarious reactions will make you ROFL — watch video

I happened to have the (mis)fortune of watching the movie over the weekend, and sorry to say, my brains have got scrambled by what I just swa on the screen. Seriously, Vikas Bahl, what exactly were you trying to do here? Was this a Disney fairytale without any fairies? Was this an awaaz against fat-shaming (if so, you haven't see the much superior Dum Lagake Haisha!)? How did you manage to convince Karan Johar, Anurag Kashyap and Vikramaditya Motwane to produce this? The film is so full of weird moments, that I found myself going trippy with what was happening on screen! Also Read - Deepika Padukone, Kareena Kapoor Khan, Anushka Sharma and more Bollywood beauties who went a little OTT with dramatic sleeves – view pics

These are ten things about the movie, that completely derailed the film watching experience for me and most of my fellow viewers! Also Read - From Deepika Padukone to Jacqueline Fernandez: B-Town beauties who took the internet by storm by posing topless in photoshoots

The cute but pointless animation scenes

The film begins with a long animation that shows Alia Bhatt's character Alia being brought to the house by Pankaj Kapur as an orphan. It goes on for about five minutes, and the animations are absolutely cool! But why exactly was this done? Is this because they can't show Pankaj Kapur as a younger man? Later, after the interval when Pankaj Kapur reveals to Alia that she is his daughter the Masoom way, there is another animation sequence to show his romance with her mother at the Air Force training academy! Again, why? Can't you be done with in a single sentence? Like 'Girl, you are my daughter from another mother!' Or they thought they cannot pass off a dyed Pankaj Kapur believably as a dashing AF pilot?

An Insomniac doesn't know about the word 'Insomnia'! 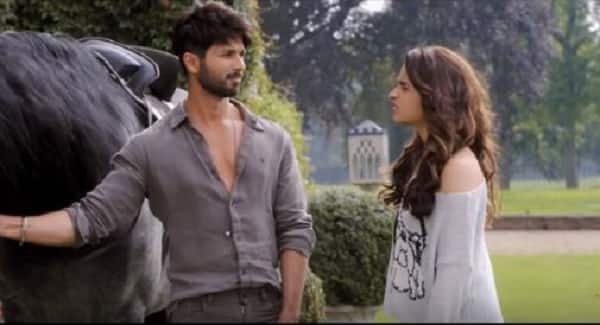 Both Shahid Kapoor and Alia Bhatt play insomniacs in the movie, yet Shahid Kapoor doesn't know the name of his condition till Alia enlightens him. It's not that he is not purely Hindi medium schooled or belonged to Bhuvan's Lagaan cricket team. He is shown speaking perfect English at various points of the movie. So what happened here, dude? Bunked an English period or something?

What was that panty scene all about?

Alia Bhatt goes for a midnight skinny dipping one night (the movie is not set in New Delhi, so she has nothing to worry about!). Shahid Kapoor joins her later for a PG-rated swim and later, conversation. the next morning when she join the breakfast table with her family and opens the platter in front of her, she finds her panty served in that! However, there is no explanation of how it ended there, and apart from a few silent gestures to Shahid Kapoor, there is no discussion about that!

Alia's family and the Sanjay Kapoor led Fundwani's are both in dire straits, and they have allowed their kin to marry each other to save themselves from bankruptcy, without knowing even the other family is going through the same issues. But that doesn't stop them from having the most lavish wedding ever, which unfortunately never happens at all! They even bring Karan Johar to host a stupid function (more on that later!) And we all blamed Anil Kapoor when he took his friends for cruise trip to seal a deal in Dil Dhadakne Do!

Alia has two cousins, who are twins and speak in the weirdest SMS lingo ever! For the heck of comedy, they can't even speak a proper sentence without abbreviating it to the point of annoyance! And they even get impregnated by the same tuition teacher, and behave as if that was the coolest thing that ever happened to them! Was that Vikas Bahl's take on Gen Next? If so, F U, Vikas! Our generation isn't that bizarre!

Everything in the film is a caricature...and I mean, everything! The Sindhis and their Chinese-Japanese jokes, the gay uncle who is also a stylist, one dimensional characters like the autocratic granny, her meek sons, a snobbish mother. Even Alia was like a caricature of himself, albeit an opposite one!

The much hyped bikini scene! 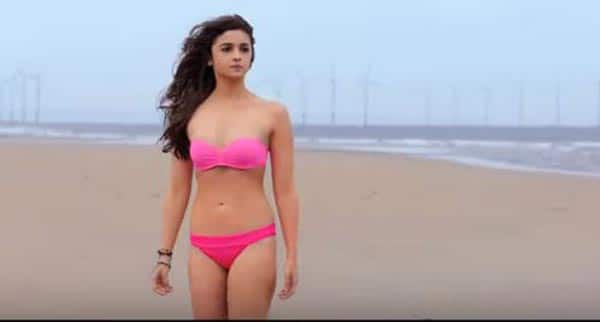 The trailers of the film paused itself to deliver what was supposed to be the iconic moment of the film - Alia Bhatt in a pink bikini, that makes Shahid Kapoor literally stop in his tracks! If you thought the scene was chopped in the film, fear not! The scene is there...only in the most weird way possible. The entire bikini scene is a dream sequence that Alia has when she gets her first sleep (You dirty girl!), where she strips off her clothes on a beach and then, for no silly reason, pushed her grandmother's wheelchair into the ocean and asks Shahid to rescue her! Weird, really weird!

Karan Johar plays a cameo where he does a Roast on himself (his famous show, his questioned sexuality). Though I really liked his snarky acting, the whole scene was quite pointless in the film, other than adding more fluff into the already over-bloated film!

The biggest WTF scene was the pre-interval sequence where both the families accidentally ingest hash brownies and magic mushrooms, and delve into what I can say as Sooraj Barjatya's version of No Smoking! We see people flying, Sanjay Kapoor with no legs, Pankaj Kapur rambling on and on...the scene just won't end!

Did Priyadarshan direct the climax?

Fine, the best moment of the film also comes in the ending where Sanah Kapoor after enduring scene and after scene and qawaali of fat-shaming, finally let go of herself, and her bridal clothes, and gives her would-be groom an earful! Totally cool, but the scenes that follow after this is something you would expect in a David Shawan or a Priyadarshan movie? People running here and there, fake shootouts, people opening up about themselves (pandit says he was a cricket commentator!) and even a dead body masqueraded as a live one!

And, Vikas, last question to you! Seriously, what exactly were you smoking?

Or were you binge-watching Breaking Bad?