#16YearsOfAitraaz: Priyanka Chopra shares experience of working with Akshay Kumar, Kareena Kapoor and late Amrish Puri; says, ‘it was by far the boldest part I have taken on’

Director duo Abbas-Mastan's Aitraaz is one of the finest entertainers in recent times. The thriller, which features Akshay Kumar, Kareena Kapoor, Anu Kapoor, Priyanka Chopra, Paresh Rawal and late Amrish Puri in key roles, has completed 16 years of release today. Celebrating this milestone, desi girl Priyanka Chopra shared her experience working with co-stars as she shared her glimpse from the film and wrote, “2004, one year into being an actor, I played Sonia Roy in the Abbas - Mustan thriller Aitraaz It was by far the boldest part I had taken on... wicked, predatory, complicated and self - serving for the most part, but also surprisingly vulnerable and emotional, Playing Sonia taught me to play my characters with conviction not judgment. #16 YearsOfAitraaz #20in2020 @kareenakapoorkhan @akshaykumar Late #Amrish Puri #Abbas Mustan @muktaartsltd.” Also Read - 7 rollicking affairs of Bollywood celebs that once made headlines but are now forgotten 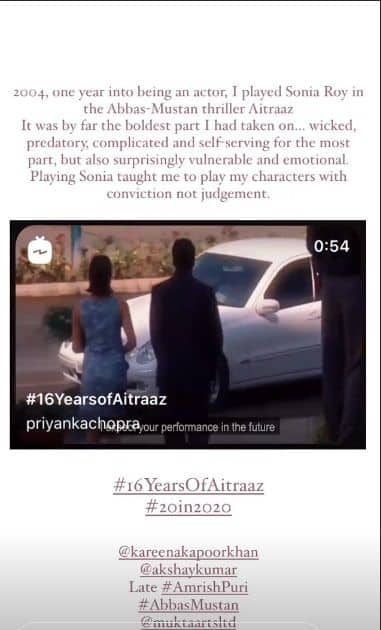 While the actress made a big name in the west, she recently revealed about facing racism in USA and told PinkVilla, "Of course, my struggles were real; everyone's is. But I choose not to talk about it or be a victim of those situations. I have always learnt one thing from my dad. When you fall down, you pick yourself up and move on. So I keep thinking about the next big thing I could do, next thing I could learn, the next glass ceiling I could break." She further said, "There was one time when America took so much from the country and I was like, 'Get lost, I'm going back to India', because I felt too small as a teenager. But it was also because I was insecure. So now when I went back this time, I was a lot more secure in my own feet. The country has given me respect, my family, my husband, my home and a different career that I started in my 30s." Also Read - 10 films where Kareena Kapoor Khan was the first choice and later replaced by Aishwarya Rai Bachchan, Priyanka Chopra and others

On the work front, Priyanka Chopra will be next in The White Tiger opposite Rajkummar Rao, which is a Netflix film. It is adapted from Aravind Adiga's prize-winning novel of the same name. The film will be helmed by Ramin Bahrani. It follows the extraordinary journey of a self-made man from being a tea-shop worker in a village to a successful entrepreneur in a big city. The global icon also has an international web series under her belt titled Citadel, which will be produced by Avengers: Endgame makers Russo Brothers and also feature Richard Madden in a key role. It will be directed by Raj and DK, who are known for The Family Man, Go Goa Gone and others.