#3YearsOfPhillauri : Anushka Sharma says, 'We were giving India its friendly, lovable, neighborhood spirit that audiences had never seen before'

Anushka feels she has a hugely enriching experience shooting for the film and learnt several new things while playing the role of a friendly ghost. Anushka Sharma has constantly wowed the industry as a producer with clutter-breaking cinema. She turned heads with her decision to turn producer at a young age of just 25 (the youngest female actor-producer) and her production company Clean Slate Films’ first film was NH10. The revenge thriller became a hit and is now one of the cult classics of the genre. Her maiden production also showed her intent as a producer who was willing to experiment and entertain audiences with content that they have never seen before. The superstar and her brother Karnesh Ssharma (who helms affairs at Clean Slate Films along with Anushka) then produced Phillauri, a love story with a twist in which she played a friendly ghost named Shashi, followed up with a superb horror genre-defining film Pari. Also Read - Alia Bhatt to Kareena Kapoor Khan: A look at transformation of Bollywood mommies before and after baby will leave you amazed 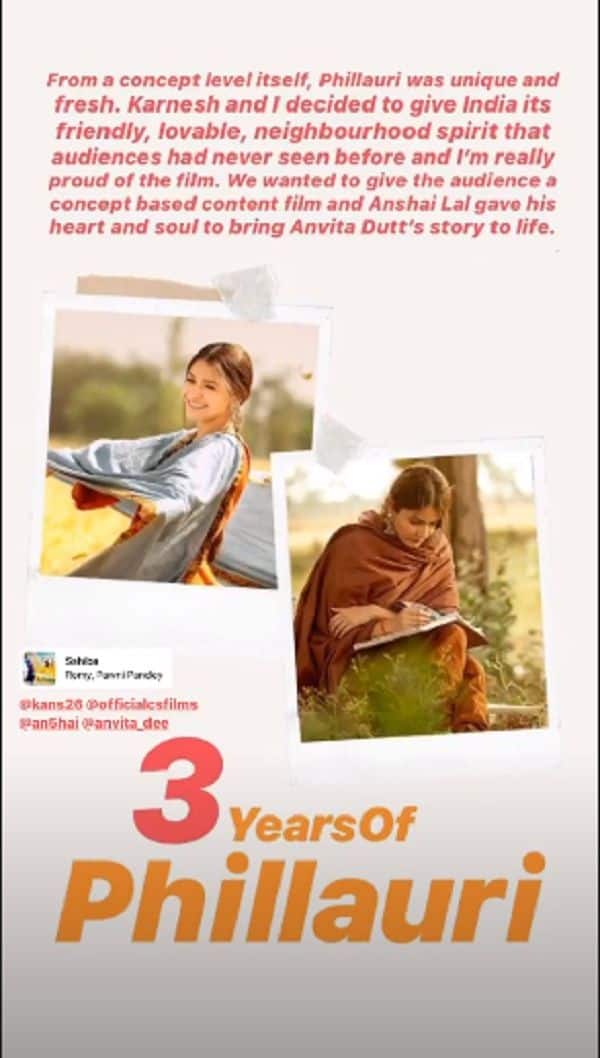 It would be correct to say that Phillauri was one of the most fascinating projects of recent times as it presented an A-list superstar actress as a cool, friendly ghost! The use of technology in the film was also in keeping with the times and Anushka ensured that she went all out to give audiences cinema that was not being made by the industry. Also Read - Pathaan box office Day 1 prediction: Shah Rukh Khan and Deepika Padukone film could rake in Rs 35-45 crores on opening day; here's how

“Phillauri was a daring project for Clean Slate Films. We were giving India its friendly, lovable neighbourhood spirit that audiences had never seen before. From a concept level itself, it was unique. I was pleased to see the reactions for the film and it validated our attempt at making something extremely new and extremely original to the audiences,” says Anushka on the 3rd release anniversary of Phillauri.

For a new production house, Phillauri was a big moment of self-belief. It showed them that they can try and push the content envelope with every project going forward. Clean Slate Films is now producing some highly anticipated content for Netflix and Amazon. Anushka says, “The film was modern and youthful and yet had an underlying cultural and historical reference that connected with people. For a young production house like ours, Phillauri was an attempt in trying to disrupt the content landscape.”

As a producer, Anushka has also tried to contribute to the music industry through original compositions and Phillauri’s album spoke volumes about her intent towards being original in creativity. Phillauri’s soulful album touched hearts of many. “Even the album of Phillauri was original. In an era of remixes, our album stood out with original compositions. I’m proud of the film and happy that we took the call to produce it,” she says.

Anushka feels she has a hugely enriching experience shooting for the film and learnt several new things while playing the role of a friendly ghost. “For me, personally, I also learnt something new as an actor. I was on the harness in mid-air when I was in the spirit avatar and delivered my scenes. It was challenging as well as exhilarating. I learnt so much about shooting and acting in a film that was forward-thinking with technology. I loved every bit of being Shashi,” she says.