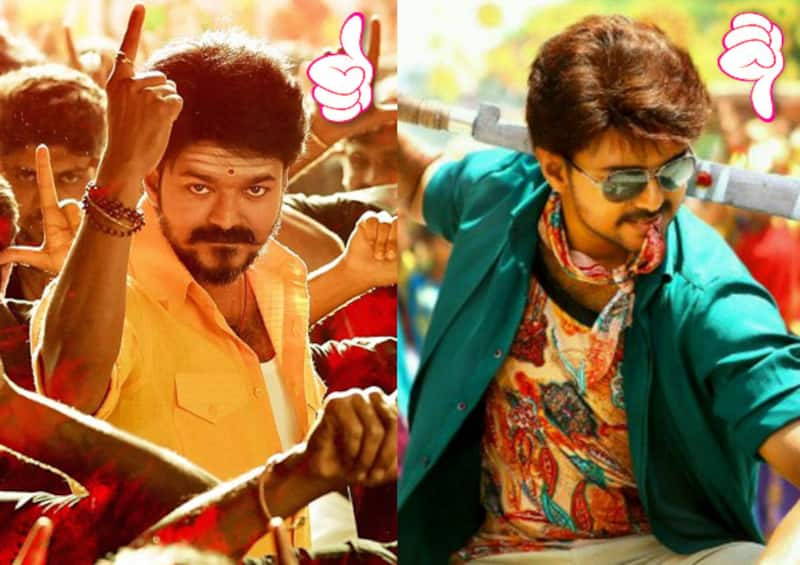 This year, Thalapathy Vijay had two releases lined up - Bairavaa and Mersal. The year began with Bharathan's film Like every Thalapathy film, this movie too garnered buzz but on its release, it received average reviews and fared just about okay the box office However, the average run was more than made up by Mersal's blockbuster success this Diwali! The movie not only created new records but also garnered positive reviews from fans, celebs alike. In fact, it's one of the biggest hits of 2017 as it became the only Tamil film to cross the Rs 200 crore mark at the Tamil Nadu box office alone. So, why did Mersal work, but Bairavaa didn't? Read on to know...Also Read: Mersal movie review: Thalapathy Vijay’s enigmatic presence and Atlee’s class direction assures a crackling Diwali Also Read - Jawan MAJOR UPDATE: Shah Rukh Khan to play DOUBLE ROLE in Atlee film; Deepika Padukone, Nayanthara both set to romance SRK?

Winner collaboration vs avereage duo Vijay - Atlee Vs Vijay- Bharathan
When Vijay and Atlee first teamed up, they created Theri, a film that revealed Thalapathy's fatherly side. The emotional, non massy avatar was a refreshing change and struck a chord with audience instantly. Theri went on to become of Vijay's highest grossers. It's no wonder when the awesome twosome decided to collaborate again, expectations had doubled! With Mersal, Atlee showed us yet another side to Vijay. As a diretcor's he always pushing the envelope when it comes to Thalapathy's talent. Along giving Vijay's superstardom its due, he doesn't forget to up his game as well. With Mersal, the duo has hit the jackpot yet again. They are clearly a lethal combination. Also Read - Jawan: Deepika Padukone to play Shah Rukh Khan's wife in Atlee's film? Here's what we know

As for Bharathan and Vijay, their partnership received a not-so-great-response when they came together for Bharathan's first film - Azhagiya Tamil Magan. Ten years later, they came together for Vijay's 60th film - Bairavaa. Vijay's lackluster character did not garner the response it should have. The film on release received average reviews however it fared decently at the box office. However, in compraison to its previous films, the movie couldn't be called a huge success. Also Read - Varisu actress Rashmika Mandanna ditches her luxury cars for a humble ride; gets mocked by netizens, 'Budget kam hai'

A typical character Vs cliched character - In Mersal, Thalapathy Vijay played not just one character but three characters. To top it all, one of the three was set in a different time period. It's not everyday, one actors plays two brothers and their father! While each of them had Thalapathy Vijay's mass appeal, They were distinct in their mannerisms and behaviour.

As for his role in Bairavaa, it was a done to death avatar that had no novelty factor to it. Yet another massy, powerful character that promised to thrash the bad guys black and blue. *Yawn*

The Mersal team held a grand audio launch in Chennai in August. Thalapathy Vijay was present half an hour prior to the event and personally welcomed the guests. AR Rahman performed live at the event. The cast and crew spoke at length about their experience while shooting for Mersal. All in all the event was a garnd success. To top it all, the album composed by the musical maestro received a big thumbs up from fans.

As for Bharathan's music album, it was launched online in a surprising turn of events because the songs got accidentally leaked online. The album overall received mixed reviews.

Relevant story Vs run of the mill story

Mersal's plot threw light on a relevant theme. The malpractices in the medical industry was not only an on-going topic but also a powerful one. Additionally, the current debate on GST was also part of this storyline. As for Bairavaa, it was a typical run of mill of the story that had no surprising twists to offer. Right from Vijay's role to Bairavaa's plot twists, the movie was predictable at every instance.

Mersal's release stirred a major controversy with respect to a certain scene in movie that allegedly mocked the GST concept in India. It irked a certain political party that demanded that the scene be deleted. Also, doctors were not happy with the portrayal of corrupt medical practices. All this negativity around Mersal ended up working in the film's favour as the movie continued to storm the box office. Suddenly everyone wanted to watch Mersal to know what the fuss was all about.

As for Bhairava, at the time of the release, Pro Jallikattu protests had broken out in Tamil Nadu. As a way of extending support, the theatres had shut down for several days. That week, Bairavaa incurred major losses which were not quite recovered in the subsequent weeks.

If you have any more reasons why Mersal worked and Bairavaa didn't, do share them with us in the comment box below.