5 reasons why we CAN'T WAIT for the trailer of Nawazuddin Siddiqui, Vicky Kaushal starrer Raman Raghav 2.0!

Here are our reasons as to why we are super charged to watch the trailer of Anurag Kashyap's Raman Raghav 2.0 that stars Nawazuddin Siddiqui and Vicky Kaushal!

Yes, Anurag Kashyap is very much the first reason but there's more! Read on...

The four teasers of Raman Raghav 2.0 are out and I would be lying if I said I wasn't tad bit intrigued by it. Directed by Anurag Kashyap, the film is a new spin to the actual character Raman Raghav, who used to haunt the streets of Mumbai in the 1960s as a serial killer. The film stars Nawazuddin Siddiqui and Vicky Kaushal in leads and the trailer of which is slated to release in a few minutes today. Also Read - From Rajkummar Rao-Patralekhaa to Saif Ali Khan-Kareena Kapoor Khan: Star couples who chose to be in a live-in before getting married

With the reunion of Nawaz and Anurag along with the newfound talent, Vicky Kaushal of Masaan fame, surely this film is going to be one joyous ride. Raman Raghav 2.0 is an Anurag Kashyap version of the actual killer of the past. Now as we all know, the director is best famous for his dark humour, we cannot expect less from this film. Could this be another Gangs of Wasseypur? Will we be just as blown away as Anurag's previous films minus Bombay Velvet did to us? Only the trailer can answer all these questions. Now I am super pumped to watch the trailer of the film and I think after the reasons I deliver, you'll be just as excited! Also Read - Anurag Kashyap's daughter Aaliyah locks lips with boyfriend on Bikaner vacay; but Janhvi Kapoor's suggestion takes the cake

Anurag Kashyap's return after Bombay Velvet debacle! Also Read - Aryan Khan gets bail: Salman Khan, Sanjay Dutt, Ranbir Kapoor, Alia Bhatt and 15 other star kids who landed themselves in the biggest controversies in the past

After the debacle of Ranbir Kapoor and Anushka Sharma starrer Bombay Velvet, Anurag faced the flak not just by the cast but also sort of left a dent in the director's career. He went underground and we missed him like crazy. But guess what, looks like he has bounced back with RR 2.0!

Have you seen the posters of Raman Raghav 2.0 yet? If not then you better hurry because they are super trippy with that touch of Anurag Kashyap on it. It has the flashy red and blue color reflecting on Nawazuddin's face. Check it out here!

We had exclusively shared one teaser out of the four teasers released by the production house. Even though the face of the psychopath is not visible, the dark, twisted mind of the killer is very much reflected in the teasers which again, you cannot miss!

The last time this duo made a reunion, hell broke loose and madness spread everywhere thanks to their hit Gangs of Wasseypur. Having Anurag and Nawaz on the same podium only means the film is going to be outright dark and too awesome to handle!

Nawaz has become like King Midas. Everything he touches turns to gold and mints crazy money at the box office. So knowing that Nawaz is gonna do some intense and thrilling work in this film, need we say more?

Even the press kits they are giving out is awesome AF! Check out the pictures of what it looks like below. 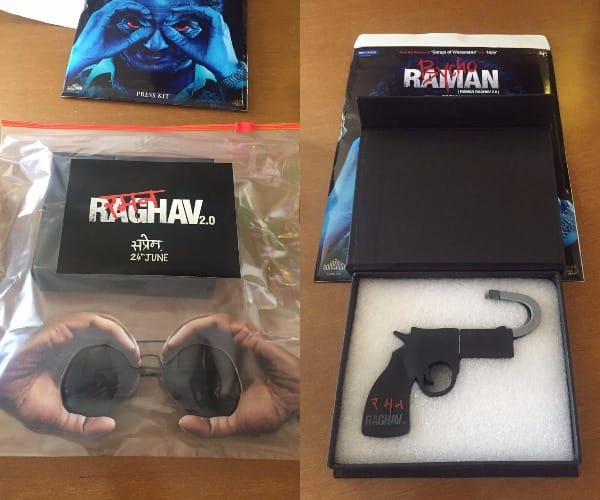 Are you excited for the trailer now that we've given you reasons? Tell us in the comments section below!