On her birthday, we take a look at Sridevi's 5 best appearances. Check out these pictures!

Sridevi will forever remain as the 'Hawa Hawai' girl who stole million hearts with her memorable performances and epic dance numbers. Be it the bubbly beauty Manju in ChaalBaaz, the glamorous Seema in Mr India or the haughty Sheetal in Laadla, Sridevi has been on top of the game with every role. The actress has proved her versatility with each character and even made a smashing comeback in films with English Vinglish. As we all know, Sridevi is not only a talented actress but is also a fashionista. The beauty has floored us with her epic style statements on many occasions and has set an example for many to follow. Sridevi celebrates her 52nd birthday today and we take a look at her 5 best appearances yet: Also Read - Sridevi, Deepika Padukone, Aishwarya Rai Bachchan and more – 6 South Indian beauties who took the Hindi film industry by a storm – view pics

If there's one actress who can carry off a saree with the utmost poise and grace, it's Sridevi. The beauty looked radiant in this stunning Sabyasachi creation which she teamed with heavy diamond earrings and a clutch by Bottega Veneta. The Puli actress completed her look with a bindi which was a perfect last minute touch added to her desi form! Also Read - Anushka Sharma, Mira Rajput Kapoor and more — Bollywood divas and their fascination with chiffon sarees continues 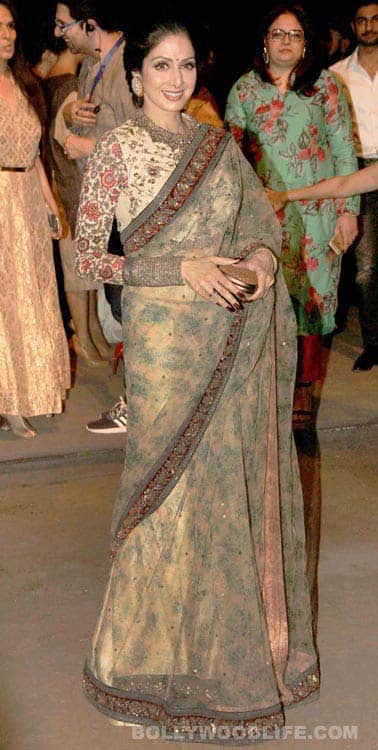 Sridevi made heads turn at the ilmfare Glamour And Style Awards 2015 in an all black attire. The actress turned up in a black pleated long skirt which she wore with a menswear inspired matching jakcet and teamd her formal attire with pumps and a clutch. The all black look could have come across as boring and monotonous but Sridevi totally worked it with her oomph. 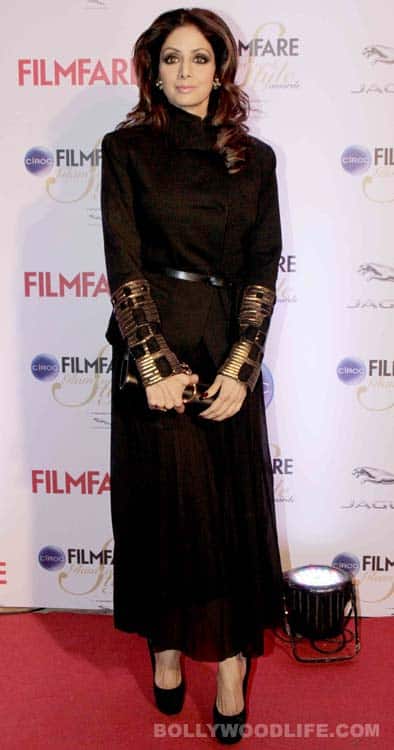 # She's got the look

After Kim Kardashian, one should take a cue from Sridevi on how to work handbags with the utmost swag. The English Vinglish actress looked stunning in a black and white printed pair of pants which she wore with a white top. The beauty completed her look with matching pumps, shades and a swanky borwn handbag. Talk about being classy!

Sridevi can work both formal as well as casual looks perfectly. The actress looked trendy in a pair of polka dot jeans that she teamed with black moccasins, a grey tee and a stole. We loved how the actress completed her looks with a pair of swanky shades and a light brown hand bag. So cool! Style divas, you watching? 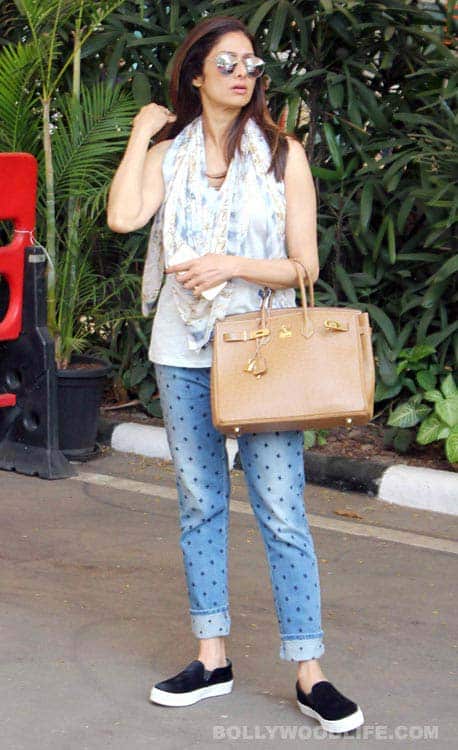