5 times Ssharad Malhotra won our hearts while dealing with his breakup with Divyanka Tripathi!

The Kasam actor is a real gentleman and here is proof!

TV diva Divyanka Tripathi might have got hitched to Vivek Dahiya in a gala ceremony but her previous relationship with Ssharad Malhotra continues to make news. On a lazy Saturday, we woke up with a post by Ssharad. The Kasam actor spoke out against fans who were posting nasty remarks on Divyanka’s social media account with relation to their relationship. It seems the lady requested him to send out this post. Here is a look at times when Ssharad showed that he truly knows how to respect his relationship… Also Read - From Kapil Sharma to Sunil Grover: 8 TV celebs charge who CHARGE a bomb for an episode – view pics

Post the split
While Divyanka Tripathi spoke about how the heartbreak had affected her, Ssharad was mum for almost a year. The actor maintained that different people vented their feelings differently and he was one who liked to keep things private. The actor was also alleged to be having an affair with co-star Rachana Parulkar but he came out to clear his co-actress' name in the fracas. Also Read - TRP Report Week 36 by ORMAX MEDIA: BIG SHOCK for Anupamaa; The Kapil Sharma Show climbs up the chart; Taarak Mehta Ka Ooltah Chashmah continues to rule the roost

First Congratulations
The actor was one of the first ones to congratulate Divyanka on her engagement with Vivek Dahiya. He has always said his ex partner was a lovely human being and deserved nothing but the best. Throughout this, there was never a hint of negativity. Also Read - Khatron Ke Khiladi 11: Divyanka Tripathi, Arjun Bijlani, Shweta Tiwari, Rahul Vaidya, Varun Sood and Vishal Aditya Singh are top 6 finalists; who will win? Vote now

Cheering on
Ssharad made his first public appearance with Pooja Bisht at Zee Gold Awards. When Divyanka was presented the award from Vivek Dahiya, he was seen clapping loudly for her. There were reports that Divyanka and he were avoiding each other shooting in the same neighbourhood but he came forth to rubbish them.

Knot at all unclear
When Divyanka got hitched, news portals played up an old story where Ssharad had said that he had made mistakes in life. The actor could have reacted but chose not to do so. He did not do anything to rob the sheen from Divyanka’s wedding.

Ex to the rescue
As per Divyanka’s wish, the actor took to social media to tell fans that they had indeed moved on and writing nasty stuff on her was showing disrespect to the lady. We also loved the manner in which he showed his appreciation for all ladies, including our champions at the Olympics! 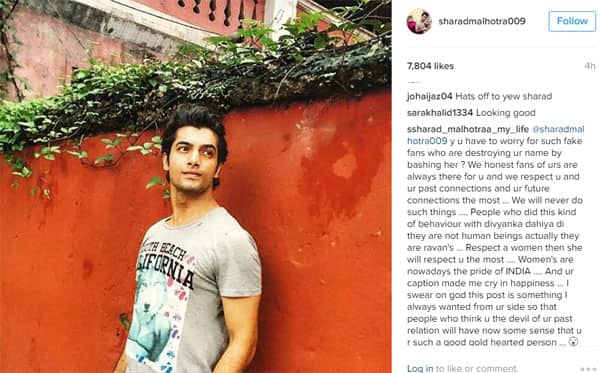 Don’t you feel that Ssharad is one of the truly gentlemanly actors around? Do let us know with your comments…