6 stand out moments from Vijay and Sridevi's Puli trailer!

After delivering two back to back hits with Jilla and Kaththi, Illayathalapathy Vijay is back with a fantasy drama called Puli. Directed by Chimbu Devan, Puli boasts star studded cast including Kiccha Sudeep, Shruti Haasan, Hansika Motwani and comeback queen Sridevi. Also Read - Puli making video: This behind the scenes video of Vijay - Sridevi starrer will leave you awestruck - watch video!

The trailer of Puli has opened to an overwhelming response from the fans and the buzz around the film is tremendous. While the masses are gung-ho over the trailer, I tell you what has made Puli trailer such a big hit among the fans. Here are 6 stand out moments from the trailer: Also Read - 8 before and after VFX pictures of Vijay-Sridevi's Puli that will leave you in awe!

Also Read - Rajinikanth considers Vijay's Puli to be at par with Hollywood standards!

One the best scenes in the trailer has to be incredibly choreographed sword fight sequences in which we see Vijay fighting masked warriors. In these fight sequences, fans get to see the stylish tricks which Vijay plays with the sword, reducing his opponents to dust. 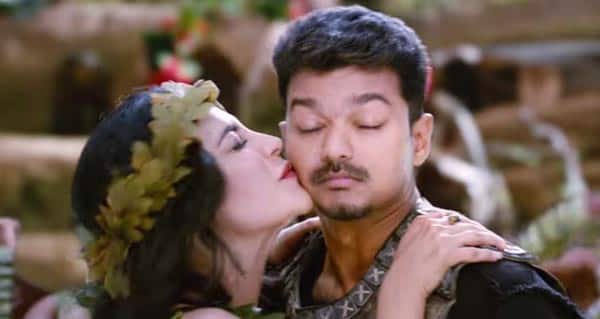 Generally kisses in celluloid these days tend to be steamy and hot, but this kiss between Shruti and Vijay in Puli trailer comes off as incredibly cute. We see Shruti planting multiple kisses on Vijay's cheek, leaving our hero stunned. This shot gives us a fleeting glimpse of terrific chemistry between Vijay and Shruti.

There is a shot in the trailer where we see out hero Vijay aka Puli(Tiger) fighting a ferocious black panther. This scene in the trailer would surely have given goosebumps to Vijay fans all over the world. I can't wait to see how that scene turns out to be on big screen.

Giants, Lilliputs and much more

The trailer also gives us enough glimpse of the fantasy elements of Puli. Director Chimbu Devan has added characters like funny little Lilliputs and dangerous looking giants, who will not fail to amaze you.

The makers of Puli have saved the best part of the trailer for the last, as we finally get to hear Vijay uttering a massy one-liner, which is sure to bring the roof down in theatres. And since it is the only dialogue in the trailer, the impact of Vijay's one-liner is massive.

Puli trailer ends at an interesting note as an element of mystery creeps in when we see a long haired Vijay riding a horse through the flames. Does this mean that Vijay is playing not one but two roles in the film?