6 tweets of Salman Khan vs 6 hours of Ranbir Kapoor on Twitter- guess who's the winner!

Ranbir Kapoor sent his fans in a frenzy with his social media debut yesterday. I thought that the actor would engage in some actual fun with his fans who have waited with bated breath all these years to connect with their icon, But sadly all that RK engaged in was some boring as hell marketing gimmick to lauch a new smartphone. Now that is a bit of a downer for me. Especially after I saw Salman Khan happily tweeting away his reaction on watching Dolly Ki Doli last night! Why do I say so? Also Read - Katrina Kaif, Priyanka Chopra, Anushka Sharma and more – meet the hottest biker chicks in Bollywood – view pics

Well, let's look at 6 tweets by Salman from last night and the 6 hours Ranbir gave to social media yesterday, shall we? Also Read - 'Back with my main,' Sonam Kapoor poses with Rhea after returning to Mumbai just before her birthday

Salman doesn't put on a pretend persona while tweeting. He is unabashedly honest, he literally types whatever he feels like ( it doesn't even have to make perfect sense.) He is nonchalant and doesn't give a flying f*ck about what people make of his tweets) and his honesty is what makes him hugely endearing and popular on Twitter. In all his tweets where he is talking about Dolly Ki Doli, he doesn't care if his opinion is well-worded or intelligent-sounding. He is just writing from his heart about what he feels after watching his brother and Prem Ratan Dhan Payo co-star's film! Also Read - Fukrey actor Varun Sharma shares his 'little joys of life' — view pics

Cut to, Ranbir tweeting pluggy pictures of the Lenovo smartphone. He didn't answer any fan questions and I seriously doubt he was the one tweeting either! From the silly pictures of his shoe and hair to a random Vine video of him shaking his butt to something VJ Jose said, everything Ranbir did on Twitter for the 6 hours he was online was shamelessly marketing gimmicky. The only good thing about Ranbir on social media was how he made small videos of himself responding to his fans but that too was so formal and not in the least intimate. Raising hopes of his fans by telling them that he is coming on social media to talk to them khul ke was not just a big let-down but it kind of felt like being cheated too! 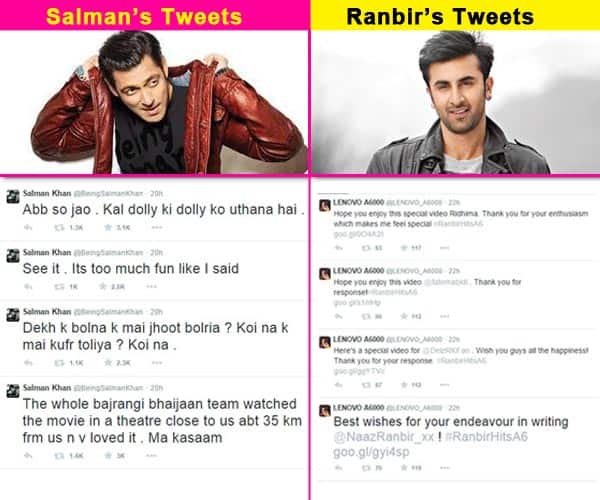 Whenever I see a Salman tweet, no matter how absurd or funny it may seem, I find it heart-warming. Ranbir's presence on Twitter gave me no such joy, I found it fake.

I just hope that if ever RK decides to show up on social media again, he isn't there to sell a product or fool his fans with a false promise of letting them get to know him better...