8 times when Shah Rukh Khan, Salman Khan, Akshay Kumar clashed with each other at the box office on the SAME DAY!

What happened when two biggies clashed on the same day?

This month we will have two biggies clashing on the same day. If you don't know which films I am talking about, you shouldn't be on this site! Shah Rukh Khan and Rohit Shetty are bringing their next blockbuster, Dilwale on December 18 making it a direct clash with Sanjay Leela Bhansali's Bajirao Mastani, that stars Ranveer Singh, Deepika Padukone and Priyanka Chopra. Also Read - Kareena Kapoor Khan flaunts her curves in a bikini on International Yoga Day; says 'free your mind' – view pic

The last time Shah Rukh Khan and Sanjay Leela Bhansali clashed, it did a lot of loss for the latter (More on that ahead...), so public and the trade analysts are eagerly looking to see if the history repeats itself or if SLB finally manage to defeat SRK, who, if history is a witness, is almost indestructible when it comes to box office clashes. Next year, SRK will be clashing with Salman Khan on Eid, when Raees and Sultan come together on the same day, and that too will be an encounter to watch out for. Also Read - Trending Entertainment News Today – Himesh Reshammiya to launch Indian Idol 12 contestants Pawandeep Rajan and Arunita Kanjilal together; Rhea Chakraborty apologises to her dad on Father's Day

As for now, let's look at all the clashes that happened in the past, post Y2K, and who emerged the winner! Also Read - BL Recommends: From Irrfan Khan's Angrezi Medium to Shah Rukh Khan's Lion King - Father’s Day films to binge-watch with your daddy dearest 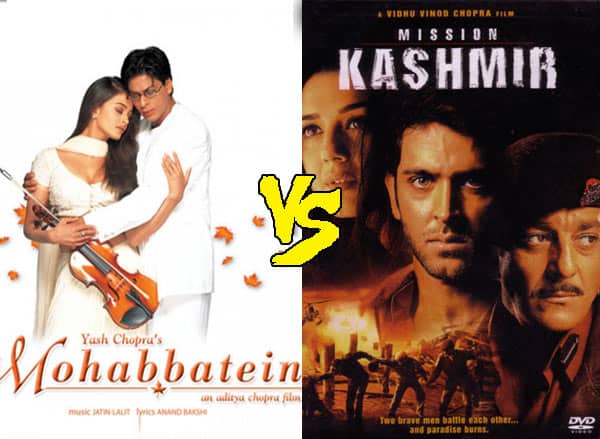 2000 was the year that heralded the arrival of a new superstar in Hrithik Roshan with Kaho Na...Pyar Hai, that trounced SRK's Phir Bhi Dil Hai Hindustani that came a week later. So later that year, when they clashed on the same day with the above films, everyone as excited as to who would win. As it turns out, SRK and Aditya Chopra's take on Dead Poets' Society took the major lead on Hrithik Roshan's terrorism drama, which also did fairly well. 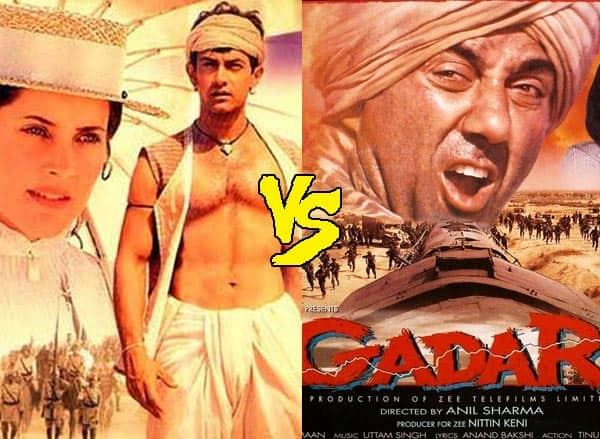 The victor: Gadar Ek Prem Katha, though it was Lagaan that was everyone's favourite

Yes...this may look unbelievable now, but Aamir Khan's Oscar nominated film came second to Sunny Deol's jingoistic drama, even though both were winners. The main reason that affected the standing was that Lagaan was nearly four hours long resulting in lesser shows. Another interesting fact about Aamir Khan and Sunny Deol was that when their solo films come out on the same day, they both emerge winners. It happened with Dil and Ghayal, and later with Ghatak and Raja Hindustani! 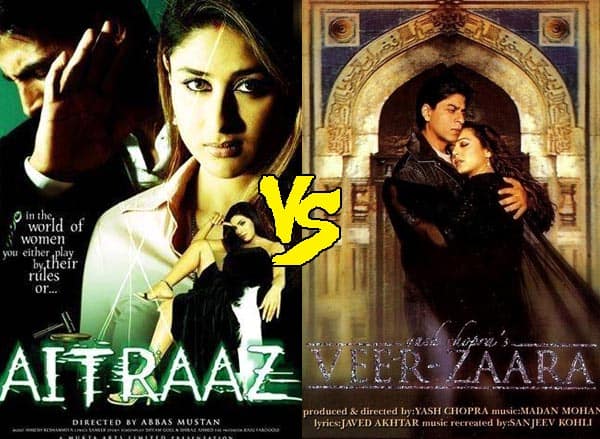 Though Shah Rukh Khan - Preity Zinta cross-border love saga, that also starred Rani Mukherji, was the biggest winner of the Diwali clash in 2004, Abbas-Mustan's remake of Disclosure also did well enough thanks to some wonderful performances from Akshay Kumar, Priyanka Chopra and Kareena Kapoor Khan. There was also the third film, Naach, starring Abhishek Bachchan and Antara Mali, directed by RGV that no one wants to remember! 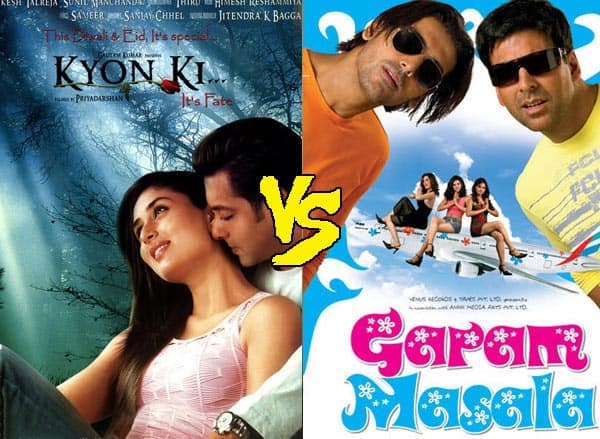 It may happened for the first time that two films by the same director came out on the same day. Unfortunately for Priyadarshan, his remake of his Malayalam classic Thalavattom (that itself is a remake of Jack Nicholson's One Flew Over A Cuckoo's Nest), starring Salman Khan, Kareena Kapoor Khan and Rimi Sen, failed to stand against Akshay Kumar and John Abraham's antics in Garam Masala, which incidentally also had Rimi Sen. 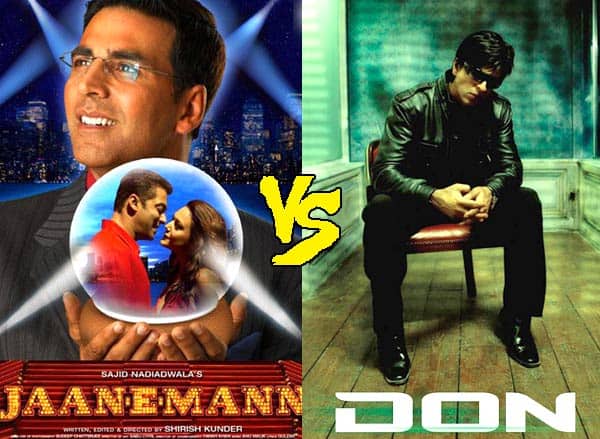 Though not everyone was happy with the idea of Farhan Akhtar relking the Amitabh Bachchan classic with Shah Rukh Khan, the film did very good business at the box office trouncing Salman Khan and Akshay Kumar's quirky romantic comedy, Jaan-e-Mann. Salman Khan later joked, during PRDP promotions, that Jaan-E-Mann flopped because he had requested the viewers to watch SRK's film first before they watch his. But the audience only watched SRK's film and checked the second one! 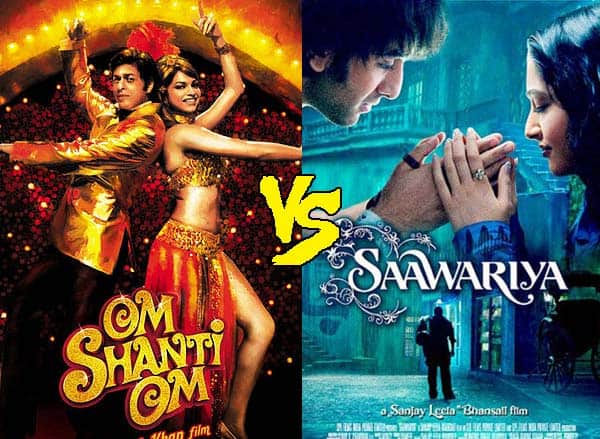 Even though Ranbir Kapoor had managed a sizeable fan following for himself even before the film's release, SLB's film failed at the box office thanks to the film's incoherent storytelling and a very strong competitor in Shah Rukh Khan and Farah Khan's masala entertainer. Incidentally, it was also the time Ranbir Kapoor and Deepika Padukone clashed on the same day as well! 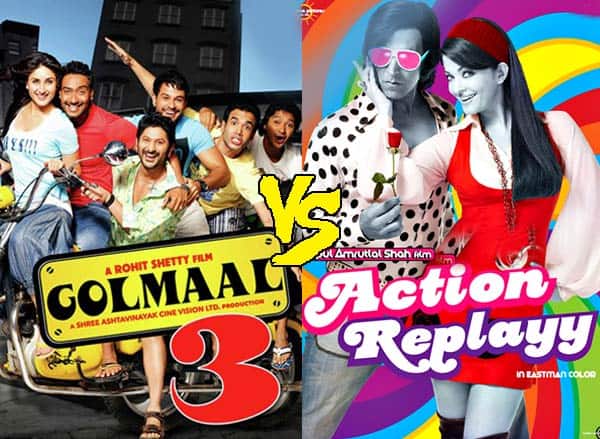 Remaking the Hollywood classic Back to the Future was not a great idea, and director Vipul Shah learnt it the hard way when Action Replayy performed poorly at the box office, even though it had a likeable pair in Akshay Kumar and Aishwarya Rai Bachchan. And it also didn't help matters for him much when Rohit Shetty brought the third film in the Golmaal franchise on the same day, and it turned out to be one of the biggest hits of the year! 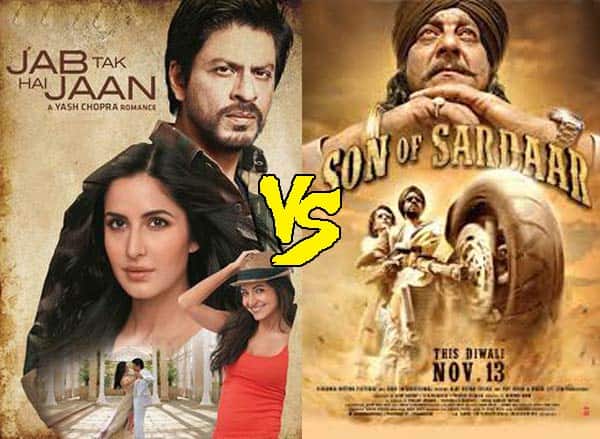 So what do you think will happen on December 18? Who will emerge the winner - Shah Rukh Khan or Sanjay Leela Bhansali? Share your predictions below...